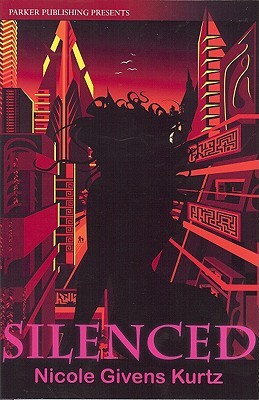 Silenced by Nicole Given Kurtz is a hard book to rate.  I say this because there were moments that I thought were 5 stars and other parts which I thought of as less than 5 stars.

The setting and world building were 5 stars.  I just loved these kinds of settings where you are not given exacting details, but just enough to get your imagination rolling until you have it in your minds eye.  It was one of things that kept me reading because I was extremely curious about the ‘place’.  The description of the people was also well done as it was a very mixed bag with hints of what they looked like so it was very easy for me to have a picture in my mind which might be very different from what the next reader might imagine.  It was refreshing to not be bombarded with skin complexions and the like so I was able to settle quite nicely with multicultural characters.  And even when there was a little more details about the characters, the story never lingered on the race, it was just part of a description in the scene.  I wonder if this makes sense.  But I really loved that about the book as well.

I totally savored this book.  It was like eating a salt and dark chocolate candy bar – YUM!

This was a sci-fi hard boiled mystery.  The Heroine, Cybil, and her working partner Jane were somewhat rough around the edges, tough girls who could wield knives and big laser guns.  The mystery was compelling and I thought realistic in how it played out.  Though some places I could figure out some of the mystery, there were other times where there were twists so it kept me guessing.  I sometimes felt that there was a sequel to another book because references were made to incidents that happened prior to the story, which added to the turn the page factor.  There was so much that I wanted to know.  I also felt that the characters were complex and  very well drawn.  Nothing was what it seemed as at first.

So overall this was a very satisfying read even with some grammatical errors.  I totally enjoyed this book.